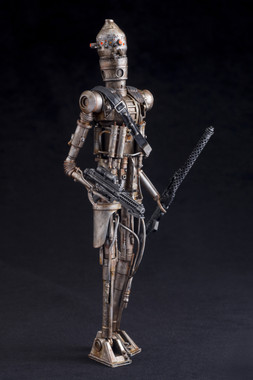 Bounty hunter IG‐88 is joining Kotobukiya’s Star Wars ARTFX+ Series!  This new series of highly collectible 1/10 scale statues features the bounty hunters summoned by Darth Vader in The Empire Strikes Back to track down the Millennium Falcon.  IG‐88 is a fearsome assassin droid who operates his own programming and takes orders from no one.

The ARTFX+ Bounty Hunter series will feature five characters: Dengar, IG‐88, Bossk, 4‐LOM and Zuckuss. Each statue will include a bonus part to complete a statue of Boba Fett!

The 1/10 scale statues will have magnets embedded in their feet, perfect for displaying them together on the included magnetic bases.

All prices are in USD. Copyright 2020 NJ Toys and Collectibles LLC. Sitemap | Ecommerce Solution by BigCommerce