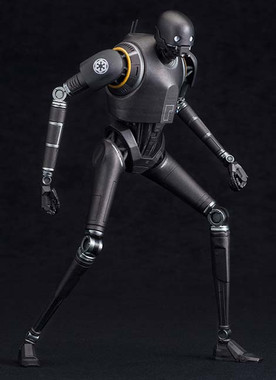 The Star Wars movie universe is set to expand beyond the Skywalker saga with the upcoming Rogue One, and Kotobukiya's lineup of 1/10 scale ARTFX+ statues is set to expand along with it! First up from Rogue One is none other than the towering droid K-2SO Beautifully sculpted in 1/10 scale with all the details in place, K-2SO looks like he stepped straight off the screen. Includes magnets in the feet for extra stability on the included base.

K-2SO is a reprogrammed Imperial security droid now loyal to the Alliance. K-2SO is an alarming sight standing within a secret Rebel base. The pragmatic droid is an effective insertion agent, as he can blend in perfectly at Imperial installations and outposts.

All prices are in USD. Copyright 2020 NJ Toys and Collectibles LLC. Sitemap | Ecommerce Solution by BigCommerce